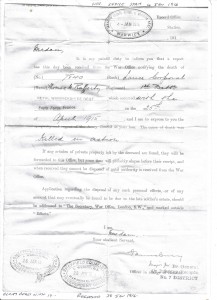 See Bairnsfather’s secretary’s letter to Kate Rafferty 30th August. His letter is dated 30th August but the year not given. reading points to  30th August 1915 as Kate had asked Bairnsfather if he could give her any information about her missing husband.  Fourth January 1916 Kate was informed officially by the war office that her husband Thomas Henry Rafferty had been killed in action.  Later Kate Rafferty contacted the Sheffield Equalised Independent Druids sending proof that her husband had been killed in action, she received documents dated  28th January 1916 as stamped by the society. (The Independent Druids 1858 was instituted as a Friendly Society, the Sheffield district had 84 lodges, the strongest in England, A mutual association for the purpose of insurance, pensions and saving benefits society.)

In 1916 Kate received a gratuity of £6.14s 4d, then in 1919 £5 from the war department found under soldier’s effects ledger National Army Museum.