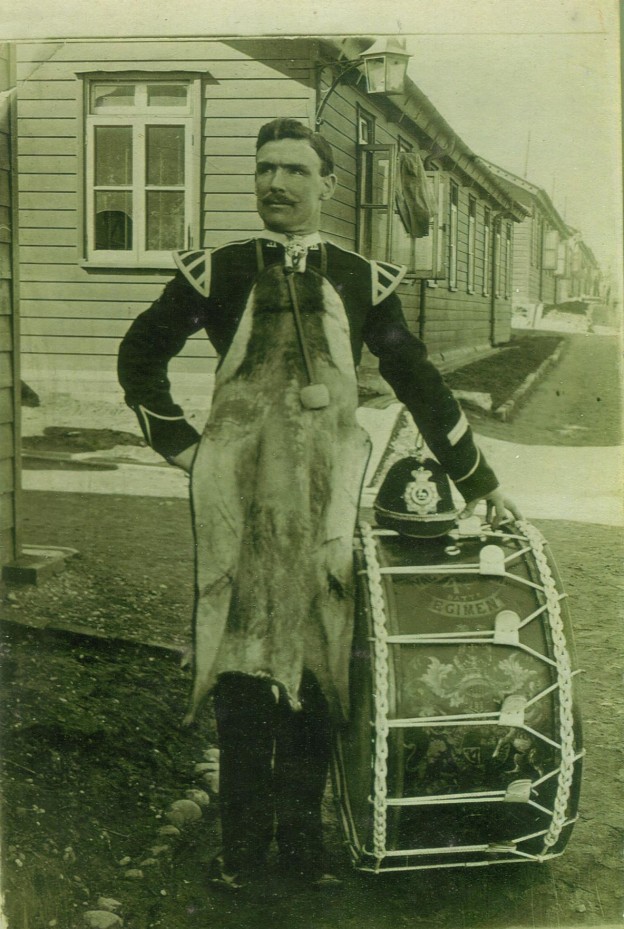 1906. When in India the Royal Warwickshire regiment wore a tropical white uniform in the heat then in the colder period they wore dark blue.  When on exercise they would be wearing khaki. On parade elsewhere  they’d be wearing a red Jacket with blue trousers ie  Uk.

All Thomas’s brothers served in the British army in the Great War and returned home.

Thomas’s  elder brother Samuel served with the Royal Warwickshire Regiment between 4-5-15 until 4-8-16  ( and was awarded the 1915 Star, British War and Peace Medal and the UK  Silver war service badge) he was discharged medically unfit for duty.

My research spans many years and some confirmed by Toni and Valmai Holt the biographers of ‘Old Bill’ and several military historians. I have pictures and original articles and letters relating to T H Rafferty’s early army service before and during the Great War and the ‘Old Bill’ connection. I have Thomas’s medals that Ivy received!–medals the 1914  Star and Clasp, the British War medal and the Victory medal. ( the 1914 Mons Star and Clasp were instituted in 1917 and awarded to those under fire or in range of the enemies  guns between 5th August 1914 until Novenber 1914) This information was recorded on medical cards and medal index cards so they would be automatically be issued for those killed in action.

The file I have is of national interest as I have original evidence ie  Bairnsfather’s  secretary’s  letter it refers to the existence of ‘Old Bill’ in a photograph Bairnsfather  took in the trenches.  Instructed by Bruce Bairnsfather in the reply  to Kate Rafferty.

In 1992 several articles were published in national and local newspapers and journals naming T H Rafferty as ‘Old Bill’, The Independent ”Old Bill identified after 77 years in that OLE” ( 26th May 1992 )  Articles in The Stand To,  the journal of the Western Front Association , Bygone Birmingham issues 6,7,24  and The Antelope the bulletin of the Fusiliers Association .

There is a City of Birmingham memorial to the tramway workers who lost their lives in the Great War at the West Midlands Transport Stadium Wheelers Lane Kings Heath Birmingham. T. Rafferty is named on this memorial., under the Hockley Depot section. ie,-

CITY OF BIRMINGHAM, TRAMWAYS DEPARTMENT , TO THE MEMORY OF OUR COMRADES who during THE GREAT WAR MADE THE SUPREME SACRIFICE FOR HOME AND COUNTRY 1914—-1918. ALSO THE SECOND GREAT WAR 1939 —–1945

Recently I visited St Peters Church in  Grove Lane Handsworth Birmingham , on the rear wall of the church is a memorial to the men of this church that lost their lives in the Great War WW1.T Rafferty is mentioned on this. The memorial was dedicated to the church to commemorate the fallen by the Archdeacon of Birmingham on Sunday 20th December 1926.

As a note of interest Bruce Bairnsfather was taught as a teenager the banjo by his next door neighbour, a Mr Czekacs and Bruce showed a natural talent for the instrument.         ,