Thomas Henry Rafferty,(‘the original Old Bill ‘) was born 27th November 1884 and was lost killed in action 25th April 1915  at Ypres during  the Great War!, He was serving with the 1st battalion Royal Warwickshire Regiment.
‘ THIS WEB SITE WAS SET UP IN THE MEMORY OF THOMAS HENRY RAFFERTY’

Thomas was born to Samuel and Alice Rafferty at the back house of 96 Branston Street Birmingham.  The fifth child of seven siblings Alice, John, Samuel ,Catherine, William and Ada . He was christened on 23-2-1885 at St Pauls church Birmingham.  As a six year old lad he spent some time in the All Saints workhouse infirmary. His father was a house painter by trade and his mother a dressmaker. They had come from Staffordshire to Birmingham to the city of a thousand trades that had become prosperous with industry. It had good prospects for work and plenty of accommodation although many were slums. As a youth Thomas worked as a cabinet fitter and polisher until he joined the army about 1901/3.  As a member of the  Royal Warwickshire Regiment he achieved the rank of Lance Corporal. He became a bandsman and played the bass drum. ( It appears a regular soldier signed up for twelve years, seven in service and five as a reservist.) In 1909 he transferred to the reserves and joined the Birmingham Corporation Tramways as a motor man and was promoted to inspector in 1913.  For a time he  lived   at 22  Lime Grove,  Venetia  Road Bordesley Small Heath Birmingham with his widowed oldest sister Alice Hannah Gillham and her future husband George Hughes . In 1911 he married my great aunt Kate Howell at St Saviours church, 29th October 1911.  Lived then at  4 Euert street then 57 Baker Street Handsworth  Birmingham.  In 1912  their daughter Ivy Irene  was born! 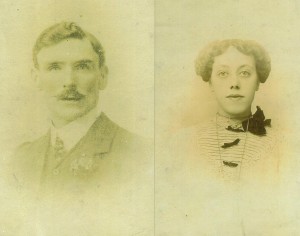 Apparently older folks of the family who knew Thomas Henry commented that he was always known to be a happy man who whistled and sang a lot so one knew he was around.  As a musician he played the piano as well as the drums. When he died his piano had to be sold as the payments could no longer be afforded. ( My mother’s recollections). .So Kate and her two sisters Amy and Eliza pushed the piano back to the shop. My mother recalled her Aunt Kate She said she was a very clean and trim woman whose white apron was always clean and starched . Kate and her sister were allowed to sweep the jewellery workshop where they worked and were allowed to keep the sweepings in a jar until Christmas then the contents were sold to be refined to make amalgam to be sold to the dental trade. This money was their Christmas bonus from their employer. At the outbreak of war Rafferty re-joined his regiment 1st Battalion Royal Warks. then going to the north to York because of threat of invasion then returning south to Southampton sailing 22nd September 1914 for Boulogne, on the S.S Caledonia, ship of the Anchor Line. ( as per the war diaries and commanding officer 10th brigade  of the Royal Warwicks Lieutenant General A Halidan. It is in his biography. ) As they passed the Isle of Wight he was to throw a bottle in the sea with a message on behalf of his comrades and himself for their wives wishing them all well. His message was published in the papers in 1914.  Rafferty received a slight shrapnel wound and sent the shard of metal home to Kate to have it made into a tie pin on his return. Rafferty took part in the Christmas  truce of 1914 on Christmas day! (Message In the bottle was picked up at Brightstone at the Isle of Wight 5-11-1914  and it was forwarded by the Postmaster General to Mrs Rafferty 8 Halliley Street Handsworth. dated 20th September, Sunday, from some boys of the Warwicks off for the final at Berlin. signed T Rafferty, J H Scott, S Rollins, S W Owen, T C L Rosser,  T Hubball, and B Rawlins.  All the boys merry under strenuous conditions. Hope the finder is ok. Write to wife and baby.)……..( see photocopy of the article, printed Nov 1914.). The British retreated after the 1st battle of Mons and the 1st battalion R.W.R. moved up the line, part of Major General C P Hull’s tenth brigade commanded by Lieutenant Colonel A J Poole at  Vielve.  At  4.30 on 25th April 1915 the whistles were blown they started and they got within seventy yards of the German trenches before being stopped by heavy machine gun fire. Seventeen officers, five hundred other ranks including  Thomas Henry Rafferty were killed in the action at the battle at Ypres, his body was never found. (commemorated on the Menin Gate) (the war diaries state on 25th April 1915). Fifteen minutes to the start the trenches were insufficiently shelled and support was unable to come up. Captain Bruce Bairnsfather was also caught by an enemy shell on 25th April 1915 in the same action in which Rafferty died and was sent home to England with shell shock and hearing damage.