In  the early months of the Great War 1914  a talented Officer in the Royal Warwickshire Regiment, Captain Bruce Bairnsfather sketched cartoon images of soldiers at war and called three of these Bill, Bert and Alf;  to quote in his book ”he sat there in the mud with them”. These cartoons were published in the press and Bill had a great audience and became known as ”OLD BILL of THE BETTER OLE” from the sketches. The great British public adored the portrayed images of ‘Old Bill’ and wanted to know “who was he”? The ‘Old Bill’ popular cartoon character became a national hero and Bill was named as the man that had won the war.

Bruce Bairnsfather had said he was a collusion of many people but the search was on…Was  Bill to be remembered in history like poor old Tommy Atkins?  (the iconic British Tommy), “the hero of India”.  No-one was sure he had existed – was he man, myth or legend?

Did Bruce Bairnsfather choose not to recall T H Rafferty as’ Old Bill’, or did shell fire affect his memory?  Or was it to create a mystery figure to keep the public’s attention?  In which case it was possible he was advised by his agents not to admit T H Rafferty was ‘Old Bill’ because of the interest shown by Kate, (Thomas’s widow with a young daughter to support), as she could have had a claim on the income from the ‘Old Bill’ portrayal.

Bruce Bairnsfather was also a musician and was a man about town, he enjoyed Birmingham’s music halls. Would Bruce and Thomas have known each other prior to the Great war ?

See the  letter written to Kate Rafferty from Edward Kelly  Bairnsfather’s secretary in reply to her letter to Bairnsfather  asking about her missing husband. dated August 30th.

Plus there is a picture of a ”rabbit hole in a British trench, sent  by Private G. Roberts, 1st Royal Warwicks, to Miss G. Turner , Heneage street, Birmingham. left to right : ”Little Babe” Roberts; ”Darkey”  Revill, ”the coke carrier”;  Lapham  ”the fire lighter” ; Biddulph, ”the stoker”; Rawlins, ”the chef”; and Tom Rafferty;” the Black Hand Commander.” ( This was published in the paper showing the photograph and description)’. I have a copy!, The Picture World, Friday 16th April 1915 …HAPPY GROUP OF WARWICKS IN A ”RABBIT HOLE” IN THE TRENCHES.))

See the war office document informing Kate of her husband’s death – killed in action  25th April 1915 . War office stamp 4th Jan 1916. The Commemorative Scroll and card from the King which was sent to the next of kin Kate Rafferty.  I have two letters from the Record Office at Warwick, one  accompanying the ”1914 STAR” and the other The British War Medal.-VICTORY MEDAL.

The Weekly Dispatch- 5th August 1917 article, — in an interview with Capt. Bruce Bairnsfather— shown is  the blown up photograph of the men he took in Plug-street wood, he identifies the originals of Old Bill, Bert and Alf.        ( I recently found this newspaper article in the British library, part of a lengthy interview with the cartoonist.)  he states; ‘I have invented nothing. This photograph I took in Plug-street Wood in 1914, and here you see for the first time the originals of Old Bill, Bert, and Alf as I knew them and portrayed them.

30th September 1917 an article was published in ” The Weekly Dispatch ” Discovers the original of ”Old Bill”  naming Thomas Henry Rafferty as ‘Old Bill’.  Birmingham’s ‘Old Bill’ Bairnsfather’s Great War character who was once a tramway worker in the city. Shows two pictures Old Bill as plain Thomas Rafferty then one as he was photographed in the trenches by Captain Bairnsfather.

November 1917, Mr I Smith of Uneeda Film Services, (official agents for topical budget) under the supervision of the Ministry of Information, was to contact Kate Rafferty with regards to making a film about her husband’s life and experiences in the army. She sent him four books/diaries which had belonged to her husband. Unfortunately for Kate, Mr I Smith disappeared along with these items and went without a trace (see copy of the agreement from Uneeda).  Mr Smith sent Kate a letter on January 18th 1918 saying he was leaving for America in a short time. In 1918 a film called the Better Ole had been made depicting the life of  ‘Old Bill'; the film was a commercial success!

Kate Rafferty contacted the periodical John Bull in April 1918. ( I have 4 letters from John Bull, the editor).  The editor then was Horatio Bottomley, who investigated Kate’s troubles without success. Later H. Bottomley was convicted of being a swindler. Plays about ‘Old Bill’ were presented on stage and Kate Rafferty was asked to attend as the wife of the ‘Late Old Bill’ and received payments and was presented with a commemorative  peace medal.

I have the original Uneeda Film Service agreement duly signed and given to Kate Rafferty from I. Smith. 25-11-1918. plus six more letters from I.Smith,  Uneeda Film Service. One dated 21-11-1918    I.Smith writes to Kate saying that he has been in communication with Mr Bottomley for some time regarding a paragraph regarding herself and the film ” The Better ‘Ole” he had in his paper. This appears to be the editor in his article to Capt Bruce Bairnsfather in his John Bull paper dated 5th October 1918.   ( This article from John Bull I found in the British Library recently 2015.).

In 1926 a film called the Better Ole was released in America portraying Sydney Chaplin as ‘Old Bill’. The character was portrayed prostrate in a bass drum and had wound strips on his blouson cuff. (Rafferty had been wounded, he’d sent the shrapnel shard back to Kate to be made into a tie pin on his return, he also played a bass drum).

In 1928 Kate with the help of a private detective Mr George Fergus McDonald  J P of 263 Grove Lane Handsworth Birmingham, tried to trace the pals of Thomas Henry Rafferty without success presumably to confirm her husband was the character ‘Old Bill’. ( I have G.F Mcdonald’s letter dated 12th October 1928 ).Out of the nine soldiers of the Royal Warwicks. 1st battalion that served alongside Rafferty and are named in the articles and  in the pictures 1914/1917 William Biddulph, Henry Revill, F Hubbal, J Scott, Charles Lapham , Bert Rawlins, William Roberts and George Owen presumably by Bairnsfather six were killed in action , four on the same day as T H Rafferty, one medically discharged under Kings Regs (18-5-16), Privates J Scott and S Rollins survived the Great War  ( they all received the  1914) Mons Star.

Private S Rollins one of the surviving soldiers from action at Ypres, his son Cyril B Rollins gave me the information that his father knew T H Rafferty as ‘Old Bill’ and gave me the photo of the Royal Warwickshire Band with his father and Rafferty playing in together. Private S Rollins was at  the Christmas truce and was to serve with the Royal Warwicks. finishing as Sergeant at Tidworth  barracks Wiltshire.

C B Rollins wrote  to  Bygone Birmingham! .(1992)……. along the lines of : -He was very interested in the article  on ”Old Bill” in the eighth issue of Bygone Birmingham, as he had  always understood that the character was sketched of Pat Rafferty. He said his father served with the 1st Battalion Royal Warwickshire Regiment from the outbreak of the 1st world war until the battle at Ypres 1915. He had mentioned on more than one occasion that Bruce Bairnsfather based his sketches of Bill on Pat Rafferty and that it was understood by the soldiers serving with him that this was the case. Several years ago there was some discussion in the press as to the identity of ‘Old Bill’ when several names were put forward. His Dad had no doubt in his mind that the Pat Rafferty referred to was indeed Thomas Henry Rafferty.

I have the original newspaper articles and adverts which relate to ww1 and the ‘Old Bill’- Rafferty connection of the time ! ie ……..’Old Bill’, More ‘Old Bill’, Message in a bottle.

PALLADIUM.    TO-NIGHT  (adverts regarding  Mrs.Rafferty  were found in the newspaper archives by Manchester library department) . ie:- Mrs,Rafferty, wife of the Late  T.Rafferty  (Old Bill), will be presented by this Management with a PURSE OF TREASURY NOTES, which has been subscribed by the Management and Audiences this week, when showing the film featuring her husband ”THE BETTER ‘OLE”.    13-12-1918 to 20-12-1918

See below photograph taken by Bruce Bairnsfather in Plug-street wood of Rafferty and pals in trench in 1914. :—- 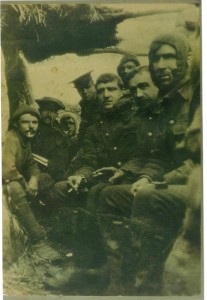